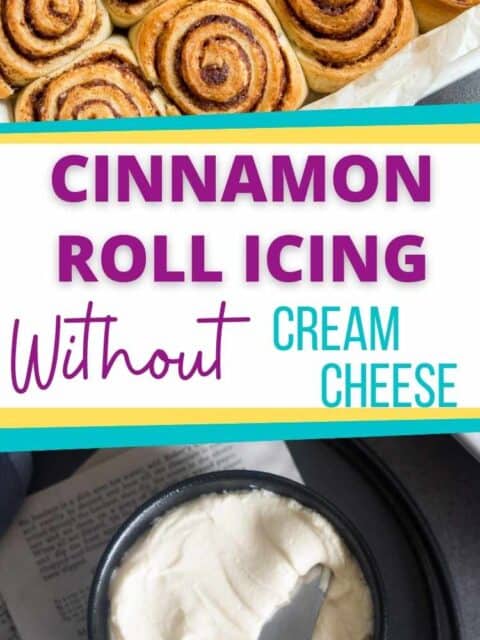 Quick Cinnamon roll icing - nailed it!!. Not too thin, not too thick, just right. It is so good that you can eat it spoonful; literally!!

And the best part?? It's made without cream cheese and gets done under 5 mins.

What is Cinnamon Roll Icing made of?

Cinnamon roll icing is a sweet, thick, sugary frosting that is spread on cinnamon rolls once baked while it is still warm. It's made from icing sugar (also called confectioner's sugar), butter, milk, and vanilla. The icing covers the top of the rolls and can be used on homemade or store-bought rolls.

What kind of icing is used for cinnamon rolls

This is a very subjective question and the answer depends on personal taste. Some people prefer thick cinnamon roll icing like this recipe. Others prefer a flowy consistency like a sugar glaze (don't worry I will definitely be sharing how you can use this same recipe to make a sugary glaze consistency). No matter what the consistency is two major types of icing is generally used - Butter based or Cream Cheese based.

In this recipe, we will be looking at butter-based frosting which is similar to buttercream frosting except for the method of preparation.

Btw this recipe works to suit all your needs; use it to frost a cookie or drizzle on cakes, cupcakes, and muffins!

I have used it along with our easy cinnamon rolls recipe. Btw it's an eggless recipe and still yields such soft cinnamon rolls that you won't believe it has no eggs in it.

By the way, I have heard that it's a family tradition to bake classic cinnamon rolls on Christmas morning. Is this true? Please let me know in the comments.

You can store it at room temperature in an airtight container for a couple of hours away from direct sunlight. But since it has milk it is recommended to store it in the refrigerator.

If you have leftover frosting or if you want to make it ahead of time then the best way to store the cinnamon roll icing is in the refrigerator.

Transfer the leftovers to an air-tight container and store them for 7 days.

When ready to use let it thaw at room temperature for a few hours till it is soft to spread.

To store in the freezer simply transfer to a zip lock bag and store for up to 2 months. Thaw in the refrigerator overnight or at room temperature for a few hours before using.

A cinnamon roll is a type of Danish pastry made with yeast-leavened dough that is rolled into a spiral and baked.

Cinnamon rolls are often topped with icing or frosting which can be flavored in many different ways.

The two most common are butter and cream cheese frosting.

But there are other popular choices in terms of flavours that include chocolate, orange, peanut butter, or even caramel, or in terms of the ease of making it.

Here are a few ideas for you:

Let me know which of the frosting recipes you prefer to use on your naked cinnamon roll. Isn't it magical how such simple ingredients come together to create a family favorite recipe?

Should you put icing on hot cinnamon rolls?

No, because the icing will melt and simply slide to the bottom of the pan. Rather put them on warm cinnamon rolls so that the icing melts a little and it seeps inside the rolls. This is the most important note that you can take away from this recipe.

How do you make canned cinnamon rolls taste better?

Making your own homemade cinnamon rolls is the best way to go, but if you’re in a pinch and have to use store-bought or canned cinnamon rolls then this recipe will help make them taste better. A great way to make canned or store-bought ones better is by ditching the icing that came along with it and making a quick cinnamon roll icing like this recipe instead. Add orange zest to make it even more interesting.

Can you put cinnamon rolls back in the oven with icing?

You can put cinnamon rolls back in the oven with icing. Just remember to wrap it in aluminum foil and then reheat it. Refer eggless cinnamon roll recipe post for more details.

Can you use regular sugar instead of powdered sugar for icing?

You can use regular sugar instead of icing sugar but in a powdered form. Pulse your regular sugar in a coffee grinder or high-speed blender until it reaches the consistency of powdered sugar. Sieve it, and use it to make the icing.

Do you put icing on cinnamon rolls before baking?

No. While it may seem like a good idea to add icing to your cinnamon rolls before baking them, this is not actually possible or advisable. You cannot add icing to your cinnamon rolls for two reasons: 1) it will make them soggy and 2) would not let them rise or get the golden brown colour and crust. Add it once baked and while the rolls are still warm.

This version would yield a thick and quick cinnamon roll icing that is of spreadable consistency. To make it even thicker you can reduce the amount of milk added toward the end.

How to make Cinnamon Roll Glaze? 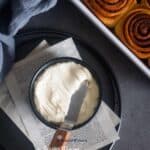 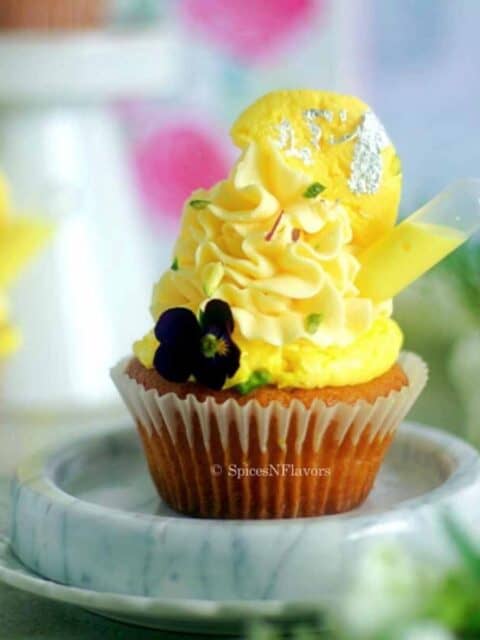 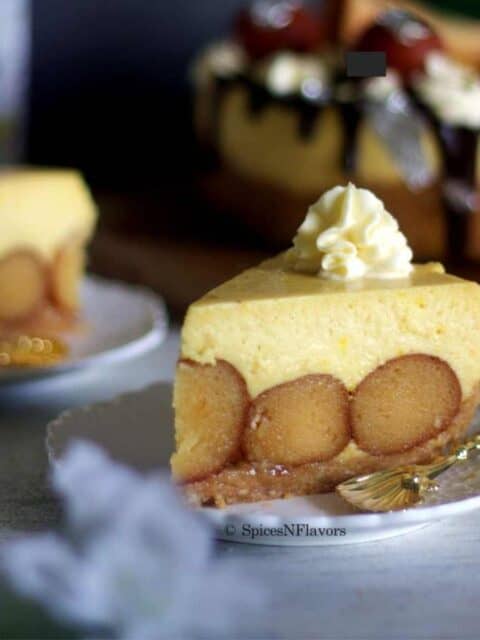 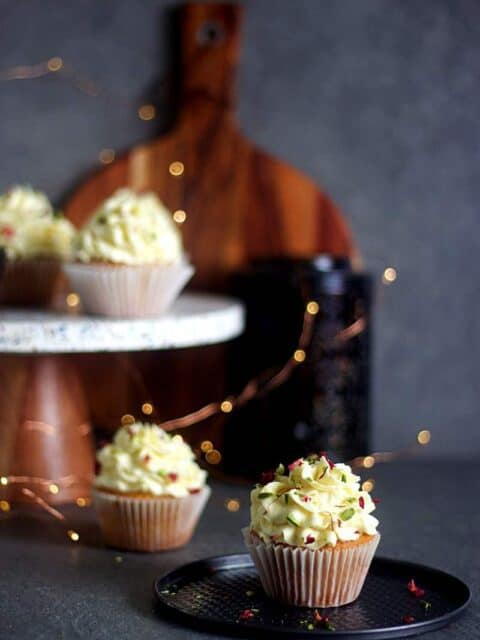 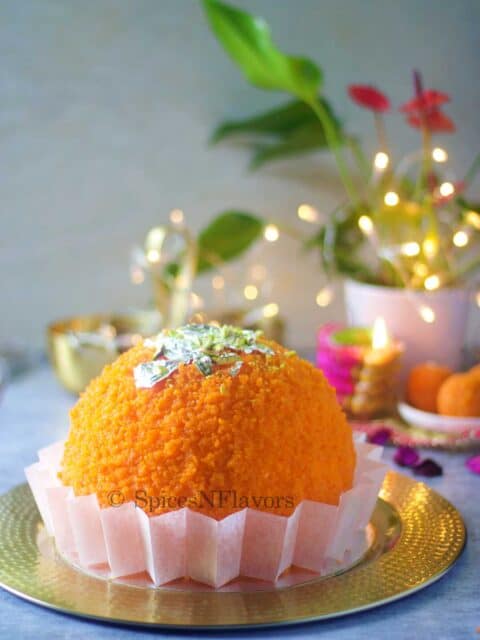 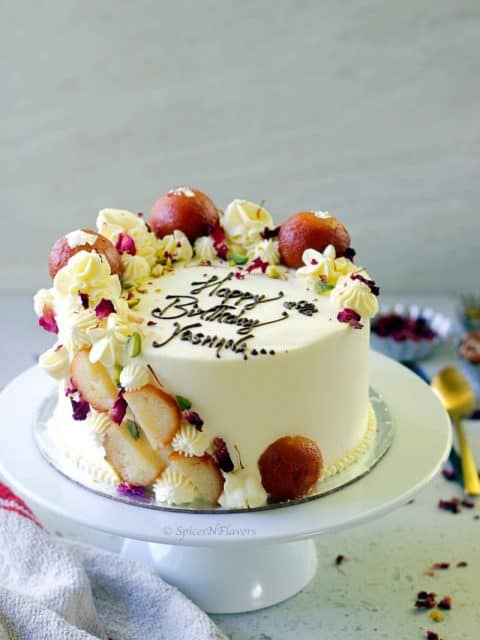