Get consistent and perfect results every single time with this Instant Pot Cheesecake Jars recipe. This pressure cooker cheesecake has a crusty biscuity base followed by a creamy cheesecake layer topped with a vibrant berry sauce - the easiest instant pot dessert one could ever make!! 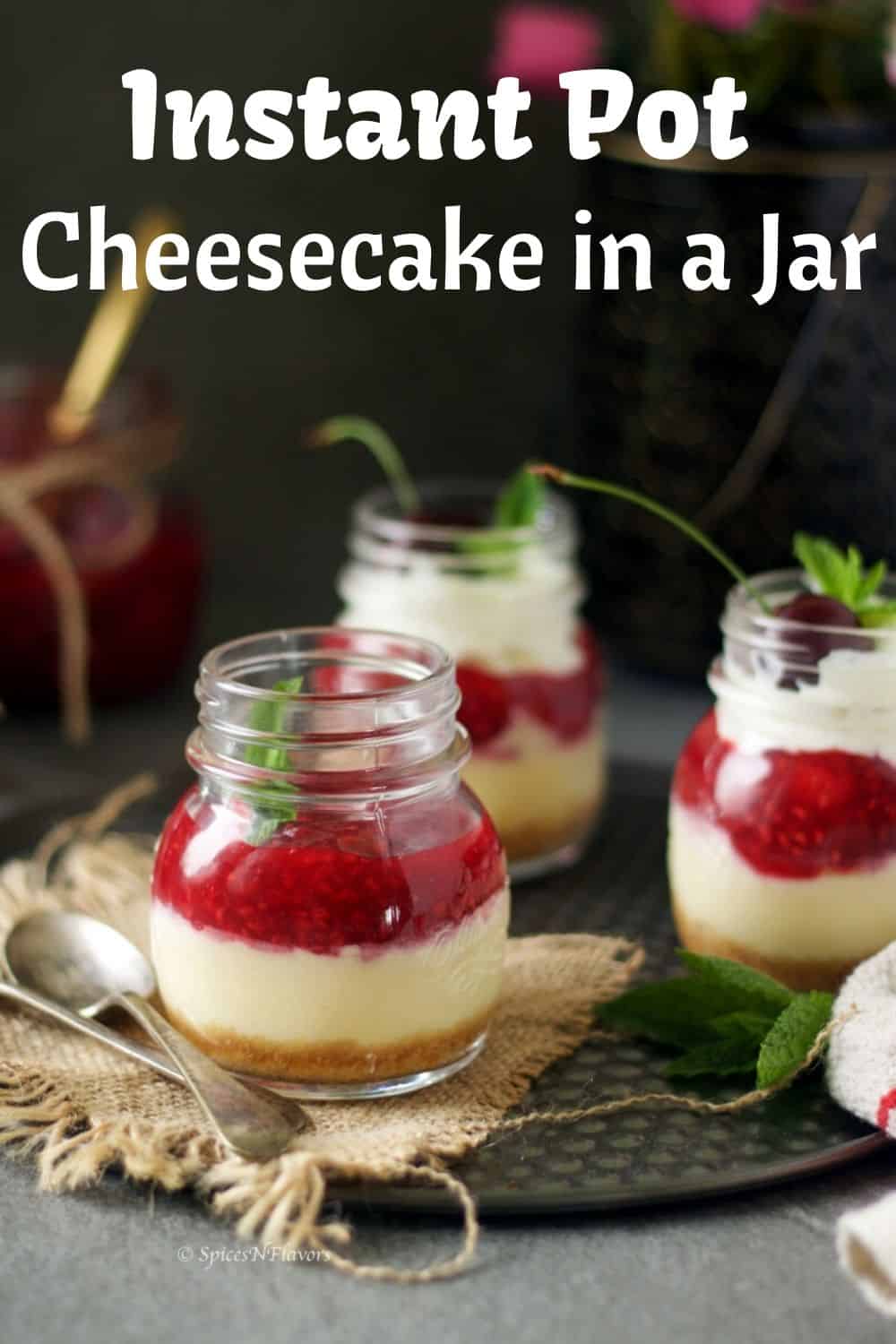 How to make Individual Mason Jar Cheesecake in Instant Pot

Making cheesecake in instant pot is one of the best things you could do.

By now it is no big secret right!!

Every Instant Pot owner might have made at least one type cheesecake in their Instant Pot.

I own an Instant Pot 6 duo plus and I have made so many cheesecakes till now.

By far my most favourite one is Instant Pot Mint Chocolate-chip Cheesecake.

I said by far, yes mark it because this Instant Pot New York Style Cheesecake stole my heart away in a literal sense.

A classic cheesecake recipe always and always has a crust of graham crackers.

We do not find it easily in stores here, so I have used plain digestive biscuits as my base.

Simply pulse together biscuit crumbs, sugar and melted butter (pic 1) until when pressed in between your palms holds its shape (pic 2).

Then divide it evenly between 5 mason jars (pic 3).

Press it down gently to form an even layer (pic 4) and let it sit in the refrigerator until you prepare the cheesecake batter.

Sometimes I even like to add some pecans or walnuts to the base which you might have seen in our Pumpkin Cheesecake jars recipe.

But a New York Style Cheesecake or Plain Cheesecake lives up to its name and is as easy and as basic as it could be so in today's recipe you will not find any additional ingredients.

While the biscuit crumbs rest and set in the fridge let us make the cheesecake batter.

Now the recipe could not get simpler than this!!

Beat the cream cheese until smooth and creamy (pic 5).

I often get asked which is the best cream cheese to make Cheesecake?

And I have always said hands down Philadelphia Cream Cheese (this is not a sponsored post how I wish it were though!!)

However, you can get good results with Anchor Cream Cheese too.

So once smooth and creamy scrape down the bowl once and then beating continuously add in sugar (pic 6) a little at a time until combined.

Mix through the lemon juice and vanilla essence (pic 7 and 8).

Finally, beat the egg (pic 9) until just mixed without incorporating too much air into the batter.

I like to switch to a spatula in place of a beater so that I do not end up over-beating the batter which is a crucial factor to get even flat tops on cheesecake.

Divide the batter evenly between the mason jars (pic 10 ). Around 4-5 tbsp in each jar.

Transfer the mason jars with cheesecake batter into it (pic 15). Close the lid. Vent to sealing position.

Choose Manual or Pressure Cooker mode and set the time to 5 mins. 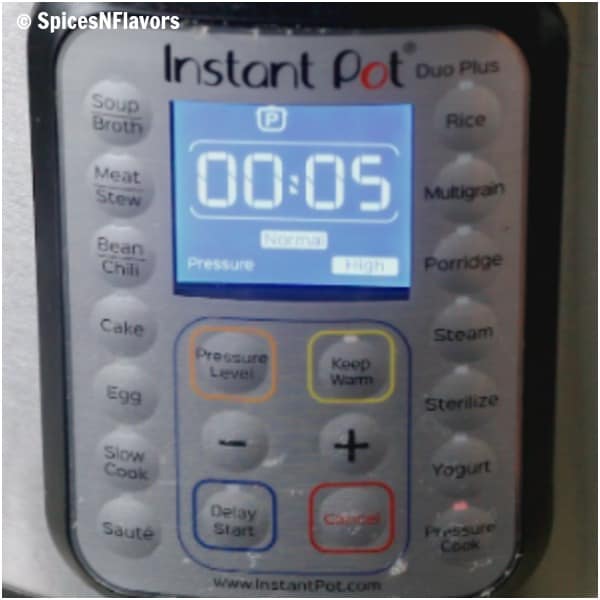 Allow Natural Release. Open the lid, take the jars out using a tea towel or oven mitten and let it cool for 20 mins on counter-top and then refrigerate for around 2-3 hours until set completely.

Oh, by the way, did you notice we have not added any sour cream while making this cheesecake in instant pot.

Trust me you would not find any difference in this instant pot cheesecake without sour cream.

I have tried instant pot cheesecake with sour cream too in our cinnamon roll cheesecake jars recipe.

We need just 2 tbsp of sour cream in place of lemon juice. So the tub of 8oz sour cream just sits in my refrigerator for long.

As I really do not make use of sour cream in my regular everyday Indian cooking recipes.

Hence I prefer to use lemon juice in place of sour cream. 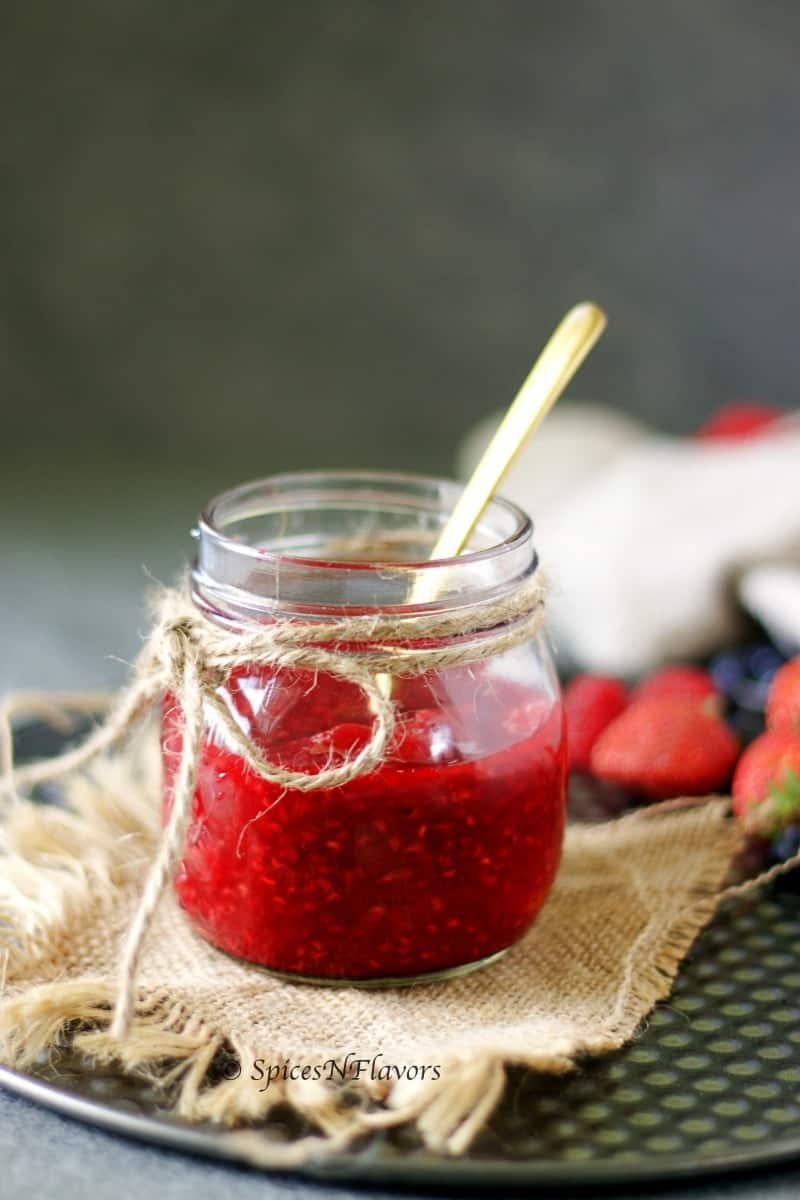 It seems strawberry topping for cheesecake are the most favourite and sort out topping.

I have used a combination of raspberries and strawberries for my topping as that is what I had handy that day.

You can also go for a combination like I have done or simply follow the recipe with a single type of berry or even mixed berries.

And if you are running out of time or really are bored then simply choose to buy the cherry pie topping.

To make the topping, in a saucepan combine together, frozen or fresh berries, sugar and lemon juice (pic 1) and cook on medium flame until the berry turns soft and dissolved.

At this stage add some fresh berries for a texture followed by cornstarch slurry (pic 2 and 3) and cook until thickened.

A thing to Note:

So it is not possible to give an exact measurement for lemon juice.

I would advise you guys to do a taste test here and then add more sugar if you find it too sour and more lemon juice if it is too sweet. 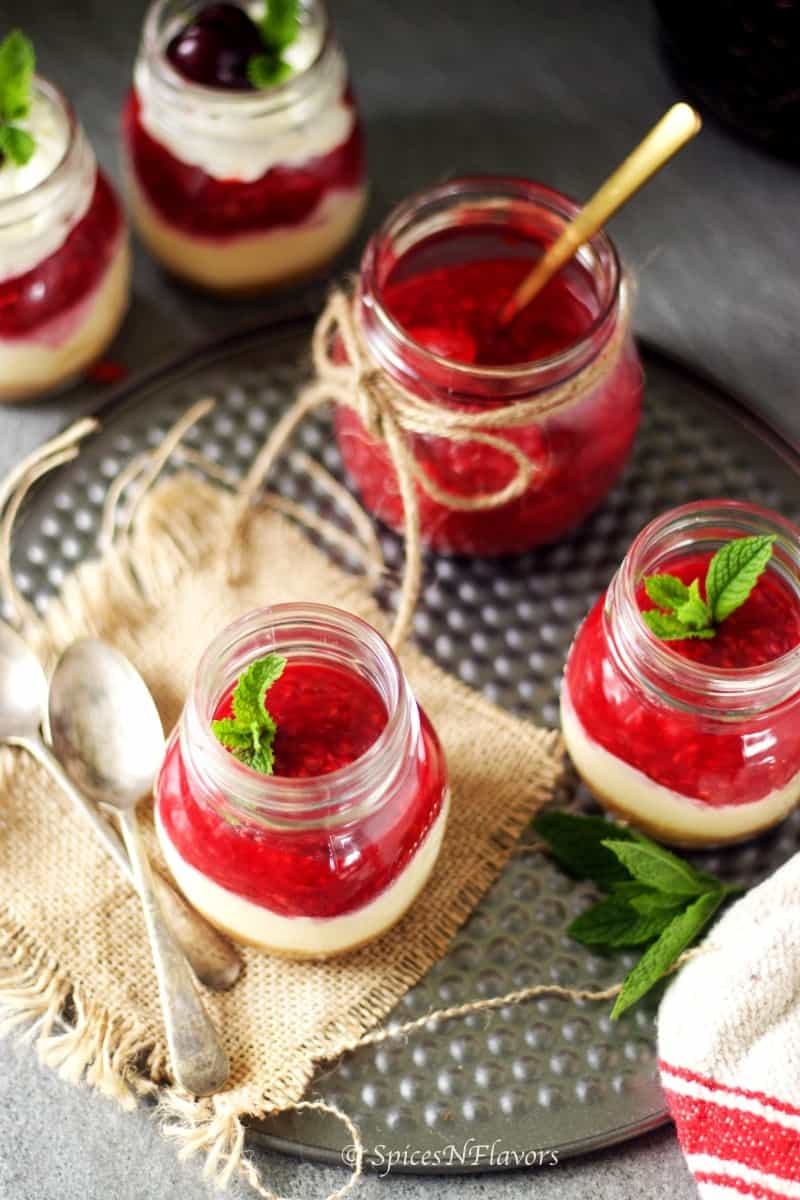 Other Topping Variations that you can try:

So apart from making the instant pot cheesecake with homemade strawberry sauce here are other topping ideas that you could try:

Ahhh... just use a combination of any if you prefer 😀

You can also try some variation when it comes to crust... Like Instant Pot cheesecake with almond crust or cookie crust would give you a different flavour altogether.

All go bold and make your instant pot cheesecake without crust.. yeah.. apparently crustless cheesecake is a thing!!

Especially for someone like me who is not a big fan of cheesecake crust.

And that is the advantage of making mason jar cheesecake.

Wondering what could be some other uses of making instant pot cheesecake in mason jars, then here are some 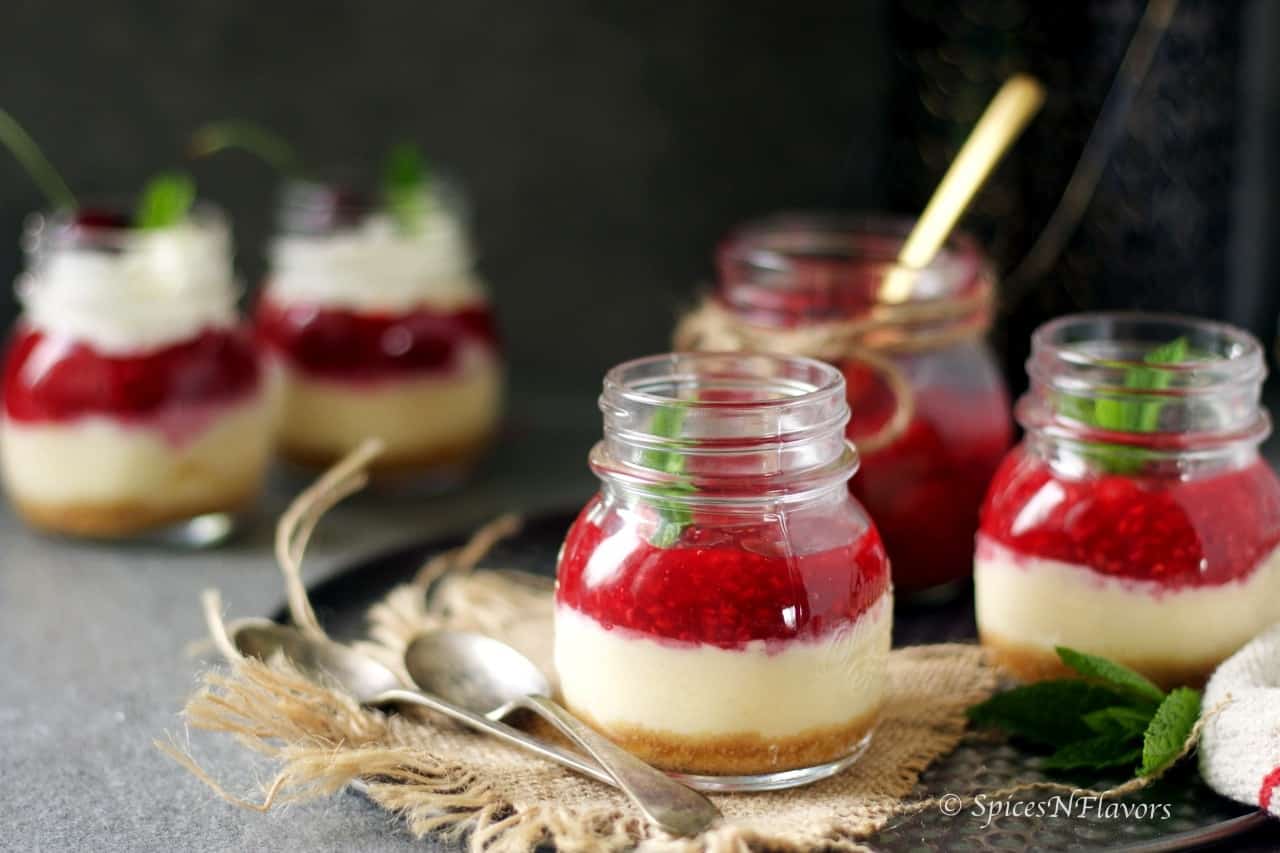 1. It just takes 5 mins of cook time. Will you believe that!! Of course, you would have to take into account the 10 mins time for it to come into pressure and another 13-15 mins for natural releasing but still, that is way less than what you would spend while making a regular cheesecake!!

2. Portion Control - Well I would not judge you if you had more than 1 at a time because these are sooooo addictive.. <3

3. No worrying about water baths or even cracks on top.

4. Doesn't that look uber cute?? Perfect for any parties or potlucks.

5. Half the amount of ingredients used as compared to a regular springform cheesecake. 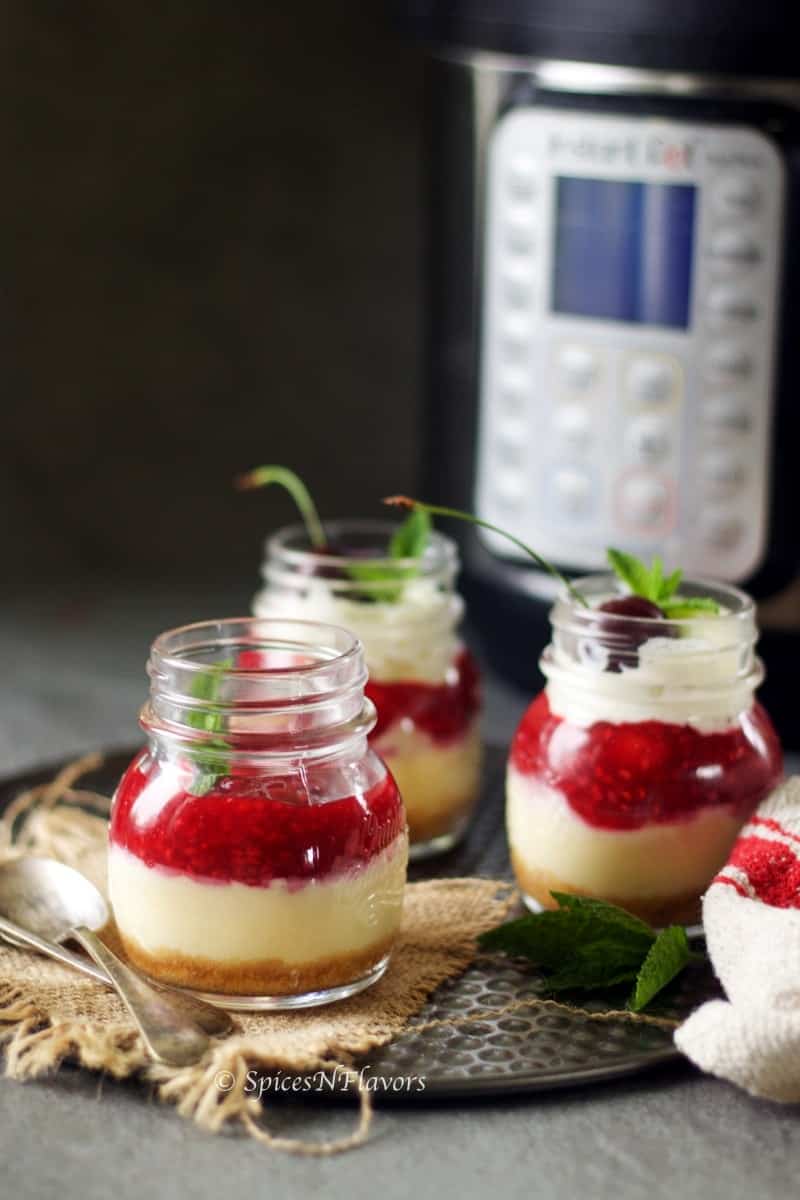 Here are my 5 top tips to make the best instant pot cheesecake jars every single time!!

2. Never incorporate too much air into the batter as the cheesecake will collapse or sink in the centre after a sudden rise.

3. Do not pack the crust densely or else it would be difficult to scoop it out while eating.

4. Allow the pot to release pressure naturally or else due to temperature shock the cheesecake might crack.

5. Once out of the instant pot allow the cheesecake to cool to room temperature before refrigerating to set completely.

After posting so many IP Cheesecake recipes especially the cheesecake in jars I have received many questions about the right way to make these that I had to include all those in here.

The most common ones here being:

What kind of Jars do I use for making my instant pot cheesecake in jars?

I got mine from a local store in New Zealand.

But these are also available on Amazon under the brand name Quattro Stagioni.

These are expensive for sure but that is what was available to me here locally.

The key point is preventing the building up of pressure in the jar.

Never put the lids on tight. A loose-fitted lid is a key here.

If you want you can also use aluminium foil in place of mason jar lids.

Also, the use of trivet is important too so that there is space between the jars and the pot and they are not dancing in hot water.

If you are still worried and not comfortable then you can also make these in a ramekin.

In fact, I used ramekins the other day when I made these cute little Chocolate Custard Pots (best dessert to make for Easter). Or any regular ramekins can also be used for that matter.

I had first thought of making the instant pot cheesecake in ramekins only to be honest with you but then I choose the mason jars only to make the photos visually appealing - the bare truth.

You can use any model of the instant pot to make the cheesecake.

I own an Instant Pot Duo 6 plus and absolutely love it.

To make mini cheesecakes in the instant pot you would need some Silicon Molds to begin with.

Follow the same recipe. Make the biscuit base and flll the silicon molds with 1 tbsp of crumbs. Press and refrigerate.

How to Stack Mini Cheesecakes in the Instant Pot?

Start by adding water to the base of the pot.

I am using a colander (pic 1) in which I could fit 3 cheesecakes. Make sure to use a colander that would fit in your pot.

In place of colander, you can use any other plate or even trivet.

If you have two trivets then you could easily fit 10 mini cheesecakes in a go. I own an Instant Pot Duo 6 plus.

Or you can also try pouring them in heart shaped silicon moulds.. Check this post on heart cheesecakes where I have enclosed the cheesecake in chocolate shells to make it perfect for Valentine.

IF YOU LIKE THIS RECIPE OR HAPPEN TO TRY IT THEN SHARE YOUR EXPERIENCE BELOW IN THE COMMENTS BY GIVING IT A STAR RATING OR LET ME KNOW BY TAGGING ME, TWEETING ME OR INSTAGRAM ME. I WOULD LOVE TO CONNECT WITH YOU AND YOUR POSTS.

CONSIDER JOINING THE COMMUNITY OF 100K SUBSCRIBERS ON OUR YOUTUBE CHANNEL FOR REGULAR UPDATES. 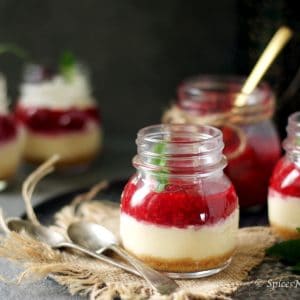 If you love cheesecake but find it challenging to make it then this Instant Pot Cheesecake in Jars recipe is SUPER easy and guarantees you a perfect result every time!

This individual cheesecake in instant pot would surely win hearts around. Looking for flavour alternatives, this Biscoff Cheesecake is all the rage now.

Not only does it look uber-cute, but it also tastes equally good too with layers of crumbly biscuit, smooth cheesecake and that vibrant homemade strawberry topping for cheesecake is something that you will keep coming back for more.

This instant pot mini cheesecake recipe is one recipe that is worth bookmarking!!

I will see you soon with yet another recipe. 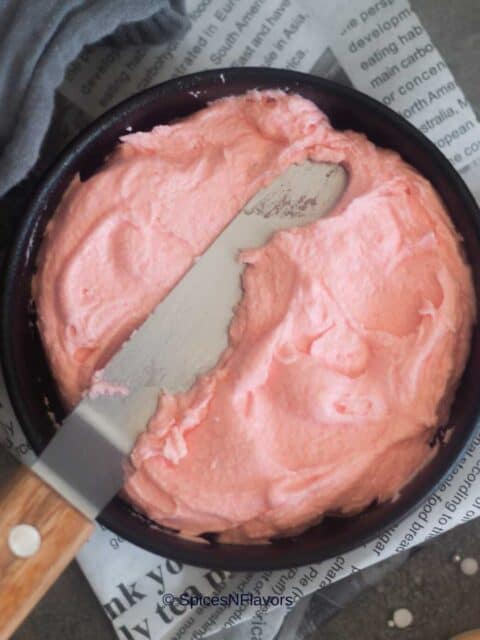 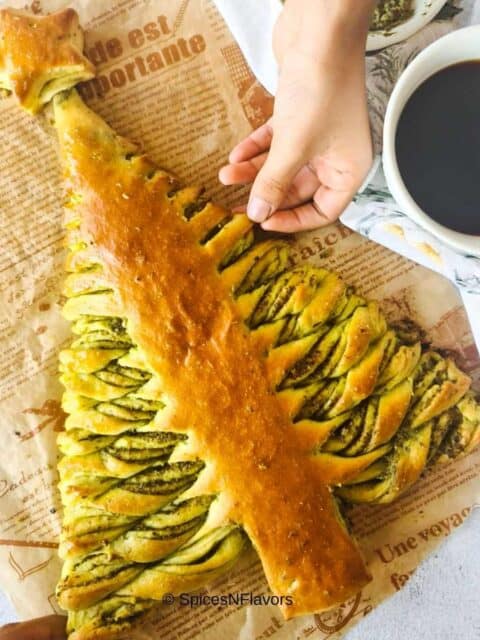 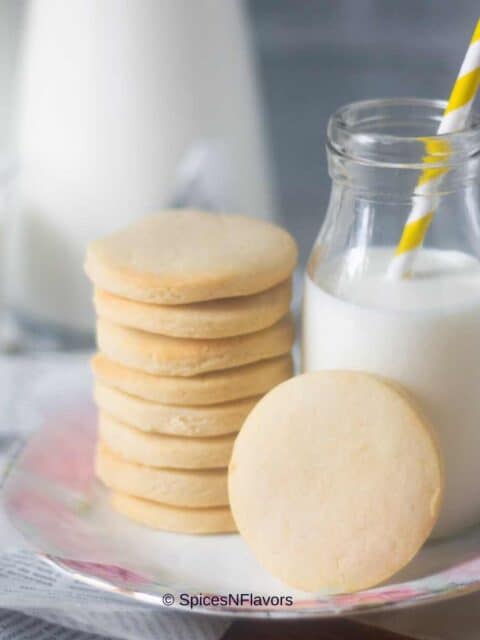 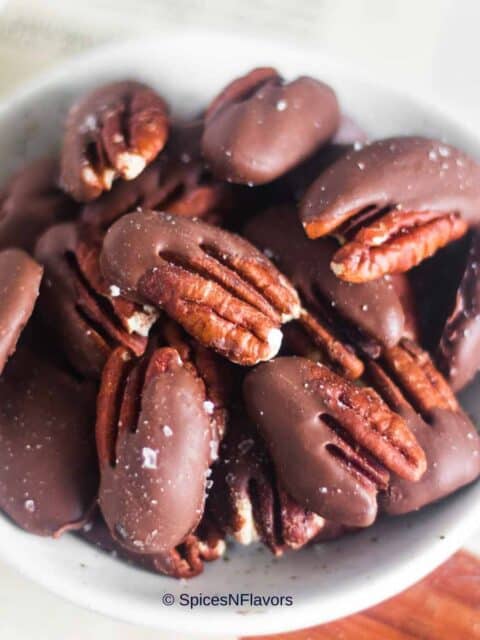 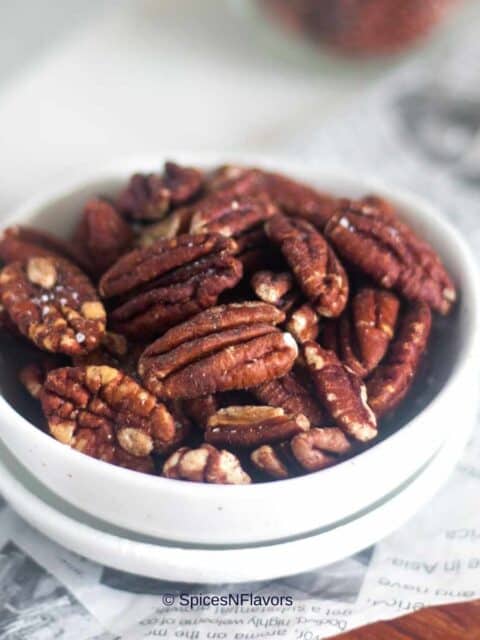 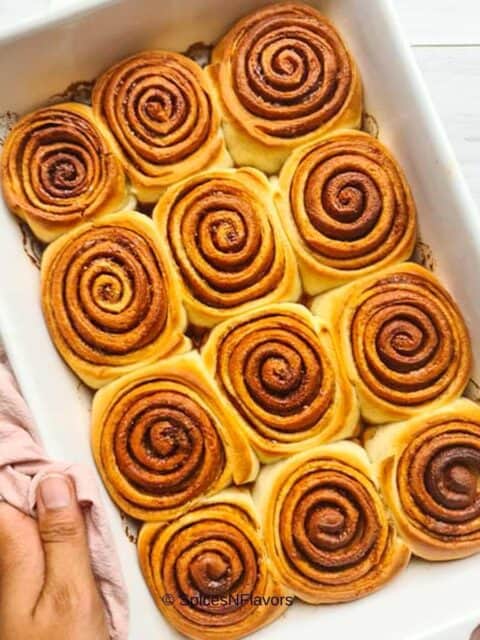